Liang Yi Zhuang refers to the standing posture most commonly associated with Bajiquan. It is characterised by the signature arm positions: one leading elbow with the fist turned up and raised to the face, the other held near to the ribs/hip and facing down.

Liang Yi Ding often refers to this posture when used specifically as a fighting technique, while Liang Yi Zhuang refers more explicitly to the posture as used for Zhuang Fa.

Most versions of Liang Yi Zhuang involve practitioners adopting a high horse stance with feet parallel; elbows raised to around shoulder height, extending in opposite directions; and hands in loose fists. One hand (the "front" one) is raised to the side of the face (or front, depending on if the head is turned), while the other ("rear" hand) is held either around chest level towards the hip. Within the same school there may be different ways of holding this posture, and the height and some of the alignment may vary.

头顶蓝天 脚踏清泉 怀抱婴儿 两肘顶山 " The head should have a pushing upward power or Ding Jin, as if supporting the blue sky. The feet are like stepping into a clear stream. The chest should be tugged in as if carrying a baby. The elbows are pushing outward as if pushing against mountains. The pushing power or Ding Jin is the main power in the posture of Ba Ji fist. There is a circle within the square structure of the posture.[2]

The position is visibly similar to the traditional Chinese character 吳 which is used for the "Wu" of the MengCun Wu family. [3]

This position appears in most styles of Bajiquan, generally as a standard Zhuang Fa/Zhuang Gong exercise. It is generally trained for developing a strong and stable root and maintaining a firm structure[1] and is useful for strengthening the legs as well as circulation of qi in the principal meridians of the body and its accumulation in the Dan Tian point. It creates an equilibrium within the body and harmony between the sky (Yang) and the earth (Yin).[3]

Various Bajiquan Taolu can be seen as originating from this posture; the Wu Family explains that:

An Family Liangyi Zhuang, like many other postures in the system, features a characteristically higher rear hand and elbow; the fist is held at roughly armpit height and the elbow is higher than the shoulder. The "forward" and "backward" directions are therefore more horizontal than in other systems. Additionally, the An Family adopt a somewhat deeper horse stance than is common in other systems of bajiquan.

Baji Association Liangyi Zhuang does not make use of a deep horse, nor does it have any particularly obvious "tells". Though the rear fist is commonly held quite low, towards the hip, there is some flexibility.

PianMen bajiquan's Liangyi Zhuang is off-angled and makes use of a somewhat pronounced upper-body folding, differentiating it from many other forms of bajiquan. When used as a strike, this folding helps make the practitioner harder to hit than if they were to stand straight up, and makes it easier to hit their target as they are cutting in.

The height of the horse varies but most often is moderately high. The rear hand is somewhat lower than in many other systems. The power line goes from the rear heel to the front toe.

Practitioners of PianMen bajiquan often refer to the posture as "Ding Xin Zhou" or "Piercing Heart Elbow" as well as the more common name: Liangyi Zhuang. 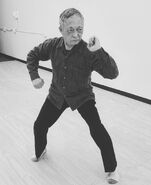 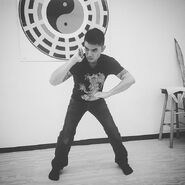 Shaolin practitioners tend to opt for a wide and deep ma bu.

The Wang family employs a high rear fist, suggesting that they favour more of a horizontal pull than other styles.

Wu Family makes use of a deep horse. Front fist faces the same direction as the body. Rear elbow is raised to chest. It is known as the “Two  principles (Yin  and Yang) stance”

The LiYangYi Zhuang position is used as the foundation of the Wu Family XiaoJia, DanDa, DuiDa and SiLangKuan taolu.[4] 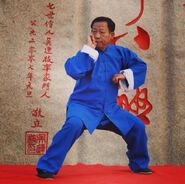 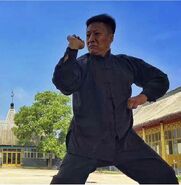 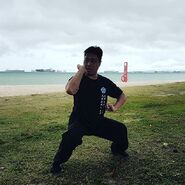 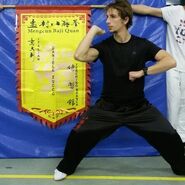 WDP Liangyi Ding has a moderately wide stance and fairly standard positioning of the arms. The lead hand generally appears to be more vertical and less up-turned than other systems such as the Wu Family's.

WuTan Liangyi Zhuang tends towards be a wider stance.

The main point of this lecture is actually standing stance. Many people get confused when they hear the word stance. It’s boring and extremely tired. That’s because you haven’t understood the meaning of stance. If you understand it, even if it’s boring, I miss you. I'll stick to it for a while, after all, the most important thing is to practice Bajiquan well. Besides, we can make Zhan Zhuang practice a little easier, but this needs to follow my steps slowly. Practicing boxing is actually very simple.

Now let's talk about the initial stage of stance (there is also the intermediate and advanced stages that will be the future). The stance we are talking about is the liangyi stance of Bajiquan. The most basic and core stance is the stance method. Before starting stance, I will tell you that the purpose of stance in the primary stage is two words- --structure. Don't think about other mental strengths, support, twist, and virtual spirits. What we have to do at the beginning is to have an accurate structure.

Here I would like to explain why I use the word "structure" instead of "posture, posture" and the like. First of all, we must understand what structure is. Structure is a conceptual form and a material one. This kind of movement state, knot is the meaning of combination, structure is the meaning of structure. The combined understanding is the meaning of the combined structure of the subjective world and the material world. In Bajiquan, we use our subjective consciousness to construct a reasonable basic form that can support all the required Bajiquan. This form can be static or moving. Only when this basic structure is completed can we slowly build the majestic building of Bajiquan. So this Liang Yi Stance is extremely important for us to learn Bajiquan well.

Cut to the main topic, two instruments. Stand with two legs parallel, step distance: put 1-2 punches in the middle of the three feet or the length of the calf. Bend knees and squat, height: step by step, self-adjustment. Slightly buckle the toes inward and don't skim them outward. Push your knees outward, and your knees should not exceed your toes. The arms are in the two-meter top position. See picture. The external structure requirements of the Liangyi piles are summarized as follows, from head to toe: bear top, dragon neck, shoulder sinking, elbow falling, chest pulling back, buttocks tightening. Open knees and buckle inside. Qualification criteria for the primary stage: one-off adjustment without adjustment to the standard two-meter pile type.

Xu style Liangyi Zhuang makes use of a high, narrow horse and a compact frame. Both elbows are roughly sternum height and the rear fist is held just below this, roughly in line with the clavicle.

Community content is available under CC-BY-SA unless otherwise noted.
Advertisement